Latest:
Home / Articles / The Only Guest in Town’s Luxury Hotel

The Only Guest in Town’s Luxury Hotel


Nadene Ghouri laments the collapse of Pakistan’s most famous tourist destination while spending time as the only guest in a 50 room luxury hotel. 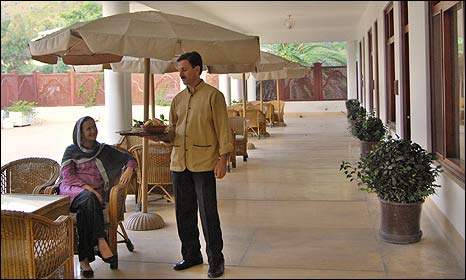 Staff at the Serena hotel had gone six weeks without a single guest to serve before Nadene arrived
By: Nadene Ghouri

A valley as green as the emeralds that lie beneath the mountains. Cold and clear rivers flowing from the snow-capped peaks of the Hindu Kush. A brilliant blue sky – it’s hard to describe the Swat valley without getting carried away.

It feels like one of the most beautiful and magical places on earth.

Eighty-five per cent of Swat’s economy was dependent on such tourism.

But today the sound of nightly gunfire echoes across the mountains, the hotels and bazaars are boarded-up, and the tourists long gone.

The ancient monuments are at risk – caught in the crossfire of clashes between the Pakistan military and Taleban fighters.

The area is now deemed unsafe for Western tourists because of the fighting and threats of kidnap.

I suspect I may have just been the last tourist Swat will see for a while.

A few weeks earlier I had arrived to work as a media consultant.

The locals now have an independent radio station, Pact radio, with a mission to inform and engage the populace in debate about their situation and encourage them to find peaceful solutions to their problems. I had gone to Swat to help train Pact’s reporters.

I checked into the Serena Hotel in the town of Mingora, Swat’s last remaining hotel in one of the few towns in the area which is still relatively safe.

The Serena has 50 rooms set in beautiful landscaped grounds. I was the only guest in the entire hotel and the first one they had seen in well over six weeks. The handful of other people they have had stay this year were all journalists like myself.

Yet despite the empty rooms all of the uniformed staff have been kept on by the Aga Khan – who owns the Serena. They are lucky. The damage to the economy means that few people in Swat have a job anymore. And they were truly delighted to see me.

“Would you like to order dinner, madam?” a saffron-suited waiter asked on my first night.

I mumbled something about whatever they could rustle up in the kitchen being fine. His face registered surprise. “We have everything listed on the menu, madam. Fish and chips with mushy peas, sizzling beef fillet, traditional Pakistani cuisine.”

“But we are a five star hotel madam,” he said proudly. “We must maintain standards at all times.”

A few minutes later a steaming plate of delicious paratha, raita and masala beans (a Swati speciality) arrived at my door. After that the staff couldn’t do enough for me. Word went out they had one – a real, live, paying guest – and all of them rushed to display their impeccable service.

Most nights – exhausted after the pressures of trying to bring live radio to the remote mountinas – I would order a snack in my room rather than a full meal in the restaurant. It left the waiter’s face crushed with disappointment. Night after night I observed as he got through his lonely shift by pacing the vacant restaurant floor until it was time to go home.

So one night I ordered a three course meal and ate it in the restaurant just to please him. Local friends who were supposed to join me couldn’t because of a curfew imposed by the military banning all outside movement and travel after dusk.

The curfew has made normal life all but impossible for the locals – people can’t get to work on time, the sick can’t get to hospital, teachers can’t get to school. Leave it too late to set off for your destination before curfew begins and you risk being arrested, spending a cold night at a check-point until dawn, or worse, being shot on sight by a nervous and frightened soldier. Many people have been.

It seemed wrong to sit in the restaurant eating like a queen when the people of Swat are so desperate. But I realised any injection to the economy, however small, was needed. And the look of professional pleasure on the waiters face as he brought out each dish made it worth it.

The staff were so eager to look after me that on more than one occasion I guiltily put the ‘do not disturb’ sign on my door just to get a few moments of peace from the constant offers of fresh towels, a cup of tea, laundry or a shoe shine.

But if at times I found the attention annoying, I was grateful for it when the fighting began. 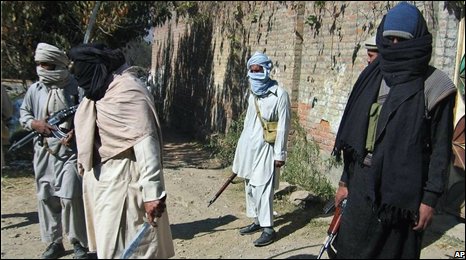 Around 7pm every evening it started. Boom boom boom, followed by the inevitable shaking of the building, sometimes so strong it was impossible to distinguish it from the earthquakes which routinely hit the region.

It was the sound of the military offensive – evidence that the Pakistani military has stepped up its battle against the local Taleban.

For several nights in a row I was unable to sleep as mortars and gunfire echoed across the mountains, sometimes for 12 hours solid. One night I counted 60 mortars in less than an hour.

Some blasts were so close the windows threatened to shatter. On those occasions I would walk the empty corridors until I found a friendly member of staff. They were always ready with gentle assurance. “Please don’t worry, madam. It’s normal. Nothing unusual happening tonight.”

For centuries nothing changed in Swat. A fiercely traditional people upholding the strong Pashtun traditions of hospitality – one reason the tourist industry came so naturally to them.

But their ancient way of life is increasingly at odds with the modern world. Here women rarely leave the home, and most men and boys carry guns. Yet the Swati people have always been open and accepting to the ways of outsiders.

And as a result this area was a real example of how Islamic conservatism can exist in peace with the secular world.

That has gone now.

The Pakistani Taleban appear to be slowly but surely taking over Swat with 80% of the Swat valley estimated to be under their control when I was there.

People in Mingora, Swat’s biggest town, say it is a question of when, not if the Taleban seize the town. From what I witnessed the Pakistan army made a lot of noise, but appear to have gained little ground.

One man told me how his brother had just been killed by the Taleban. The brother stood out for being clean shaven and wearing a New York Yankees baseball cap, things likely to have offended the bearded, anti-American militants. He was dragged from a shop. His body was found a week later, with his hands tied behind his back and a gunshot to his head.

Suicide attacks by the extremists are also on the increase. They are ostensibly aimed at military targets but hundreds of ordinary people have been killed and injured by them.

Despite this, popular and practical support for the Taleban is growing with many locals accusing the Pakistan military of firing indiscriminately and causing needless civilian deaths.

The thing everyone does agree on is that ordinary families, women and children are paying the heaviest price.

One evening I sat with the staff sipping chai on the hotel terrace over-looking a flower-filled garden, enjoying moments of surreal calm before the nightly fighting began. I thought about how critical the events unfolding in Swat and the rest of Pakistan’s tribal areas really are, not only for the local people, but for global security.

One of the guards sighed and gestured across the grass with his arms: “This is where we used to hold weekly barbeques, we had a traditional tabla player and all the guests would dance.”

He turned to me expectantly, and asked: “Do you think those days will ever come back to us?”

He looked so desperate for me to say yes, I truly wish I could have.

But as another exploding mortar thundered in the distance, I could not.