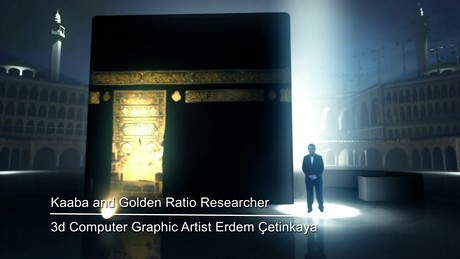 Number of Golden Ratio, mystery of Kaaba, Miracle of Islam and Koran, it is the high time for Divine Secrets, Divine Mysteries. Soon on display!

In a little while, you will see scientific proofs of unbelievable mysteries that have remained hidden in the Holy City of Mecca for thousand of years with your own eyes. Mecca is willed as direction of kowtow, convention place for billions of Muslims and as the holy center of Islam. Those Muslims, who can afford, are prescribed to arrive go on a journey through Kaaba, Muzdelife and Arafat and to convene in the sacred city.

Phi Constant- 1.618, superior design number of mathematics. The Creator has always used the very same number in numerous events in the universe; in our heart pulses, the aspect ratio of DNA spiral, in the special design of the universe called dodecehadron, in the leaf array rules of plants called phylotaxy, in the snow flake crystals, in the spiral structure of numerous galaxies. The Creator used the same number; the number of golden ratio which is 1.618…

It is determined that this ratio has been used for the design of various reputable architectural structures, even including Pyramids in Egypt. Famous astronomer Kepler defined this number as a great treasury. Numerous famous painters, engineers and architects, like Leonardo Da Vinci, have been using this ratio in their works of art for hundreds of years.

As a result of his 25 years long study, aesthetician Dr. Steven Markout proves that each of human faces and bodies, created pursuant to this ratio, are completely beautiful. If the relative ratio is 1.618 for the components of any structure, then this form will be convenient to Golden Ratio, the perfect design.

So, where is the Golden Ratio Point of the World?

The miracle has not been completed yet; The Golden Ratio Point of the World is in Mecca city according to map of latitude and longitude which is the common determinant of mankind for location.

The proportion of eastern distance to the western distance of Mecca’s solstice line is again 1.618. Moreover, as shown in the Figure, the proportion of the distance from Mecca to the solstice line from the west side and perimeter of world at that latitude is also surprisingly equal to the golden ratio, 1.618. The Golden Ratio Point of the World is always within the city borders of Mecca, within the Holy Region that includes Kaaba according to all mapping systems despite minor kilometrical variations in their estimations.

At home, you can precisely measure the distance between any two points of World by means of Google World’s ruler feature. If you wish, you can easily verify the correctness of the given ratios by calculating latitudes and longitudes or even by using a simple calculator. In drawings, you initially see how to locate start and finish points on Mecca city and North Pole. With respect to positive longitude and latitude values and by taking drift angle to the land, but not to the sea, the single Golden Ratio Point of the World is Mecca.

Phi matrix program is an American program used for displaying golden ratio of pictures and drawings. If we assume the longitude and latitude map of the World as an everlasting painting which has an endless depth, and open it in this program, we will find out that the Golden Ratio Point of the World is the City of Mecca.

Golden Ratio Miracle in the Verse, Mecca of Koran.

There is one unique verse in Koran that includes Mecca word and an expression that mentions clear evidences within the city which will grant faith to humanity. The relation between the City of Mecca and the Golden Ratio is clearly engraved in Ali Imran Surah’s (section of Koran) 96th verse. The total number of all letters of this verse is 47. Calculating the golden ratio of total letters, we find out that the word of Mecca is implied; 47 / 1,618 = 29.0. There are 29 letters from the beginning of the verse till the word, Mecca just as in the world map. If only one single word or letter was missing, this ratio could never been constituted. Without pushing the limits, we have conducted the very same process that we conducted on world map and witnessed the glorious coherence of number of letters that reveals the relation of Mecca and Golden Ratio.

All these evidences show that; The Creator of the World and mathematics is the same One and Single God, the indefinable and great force that has created Kaaba, holy region and Koran. He reminds whole humanity that he has granted signs to all humanity on the basis of his foreknowledge about the future and the common languages of humans.

Discoveries regarding the relation between Golden Ratio, Mecca, Kaaba and Koran have been increasing day by day. In the figure, it is indicated that measurements by golden ratio compass that is also known as Leonardo compass, prove that Mecca city is located on the Golden Ratio Point of Arabia while Kaaba is located on the Golden Ratio of Mecca City. According to probability calculations, all these proofs can not be incidental.

Try to survive until Summer, 2009. You will witness to miraculous news in holy books, Golden Ratio Point of the World, great mysteries about Jesus the Christ and Hz. Mohammed (SAV) with their scientific proofs.

This discovery is made by the 3d graphic artist, director who made some works that are world-wide famous, Erdem Çetinkaya. Right now his work of documentary-movie which includes the miracle of Kaaba and the miracles named “Holy Mysteries”.