Look inside the book Of all her novels, none has received as much recognition as Raja Gidh which centers around the forbidden truth. The plot builds around the symbol of a vulture, a bird of prey, that feeds on dead flesh and carcasses. The moral thought implies that indulgence in the forbidden leads to physical and mental degeneration. This is creative writing at its best.

Raja Gidh by Bano Qudsia is one of the most widely read and acclaimed Urdu novels. Gidh is the Urdu word for a vulture and Raja is a Hindi synonym for king. The name anticipates the kingdom of vultures. In fact, parallel to the main plot of the novel, an allegorical story of such a kingdom is narrated.

Raja Gidh, a phenomenal and classical novel written by Bano Qudsia . This novel not only delineate the long-term effects of “Rizq-e-Haraam” on the lives of human beings ,but helps in revealing some of the main reasons for dissatisfied and catastrophic life.

The characters in Raja Gidh are everyday characters (basically it’s us). The writer compares the ‘human nature’ with ‘Gidh’ (scavenger) and tries to convince the reader that humans are just like Gidhs (even worst then them). If a Gidhs eat meat of only dead animal so are humans, who always like to take advantages of weak /disturb and emotionally dead people. In trying to gain what is beyond his/her destination he often choose the forbidden path which leads him to earn Rizq-e-haraam. The writer comprehensively explains the adverse effects of Rizq-e-haraam on human’s genes mutation process. It could lead to insanity and abnormality which is then genetically transferred to next generations.

The second point which is strongly highlighted though out the novel is the concept of “Ishq–e-Lahasil” (love with no destination) . Love for forbidden desires always leads a person in earning rizq-e-haraam which in turn destroys one’s life and at the end the person is left alone with nothing except his discontented life. In order to convince the reader on this point, characters of Qayyum and Semi Shah are introduced in novel. Qayyum, a middle class member of society falls in loves with Semi Shah, a liberal and beautiful women who had a true love for her other class fellow. Due to some circumstances Semi is unable to marry her beloved and this makes her emotionally upset and weak. During this time of depression and loniless Qayyum takes physical advantage of Semi Shah but as always remains unsuccessful in emotionally molding her love feeling towards him. This was Ishq-e- lahasil of Qayyum. He ran after someone who was never meant for him and his desire lead him towards the wrong path and he kept moving in the wrong direction and at the end was left alone with nothing but regret and dissatisfaction.

This novel strongly reflects on the negatives points of our society today. If only we can understand the concept and adverse effects of Rizq-e- haram and learn to strongly believe in Allah and the fate decided by him , we are likely to prosper as a good Muslim and a perfect member of society. I strongly recommend this novel to all and lot of thanks to Bano Qudsia for such a great contribution to Urdu literature. 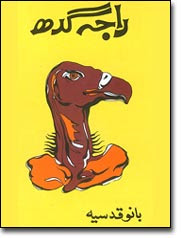 If you are unable to download this book, kindly let us know. Also please view the following link for more books!